This post originally appeared on Michaela Vignolis "My Open Research Blog". She is Junior Scientist at AIT, Austrian Institute of Technology, and Board member of YEAR since 2013. 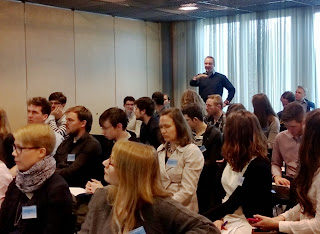 The third Annual Conference organised by YEAR, the Young European Associated Researchers Network, offered training and networking possibilities for young (respectively early-career) researchers with the focus on how to integrate Open Science in European Projects. The conference took place on 11-12 May in Espoo, Finland, and was hosted by VTT and co-funded by the FOSTER Project.

The conference was a great success and - as one of the organisers of the event - I am proud to say that it surely was the best YEAR Annual Conference so far. Various participants from all over Europe - and for the first time also from non-YEAR member institutions - attended and actively contributed to the conference. It was a great group of people who made the training programme as well as the social networking part next to it a real pleasure.

The programme followed the same concept as the last years: on the first conference day various talks and trainings took place in order to provide the attendees with good background information on the topics as well as tips for publishing Open Access, Open Research Data, and for getting recognition for their Open Science work. 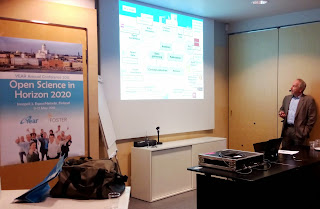 The first invited keynote was by Jean-Claude Burgelman (European Commission, DG Research and Innovation). He presented some results from the recently conducted public consultation on Open Science by the European Commission and gave us an insight in the Commission's efforts in terms of fostering Open Science.

In the second keynote Liisa Ewart (TEKES FI) gave us an introduction on Open Access requirements and Open Data Pilots in H2020. She gave us a very useful overview and provided links to further information in her presentation.

The first seminar was led by Nancy Pontika (The Open University UK). Next to a brief introduction to Open Acces she provided an insight on the importance of aggregation and data mining, and gave an overview of the applications developed by CORE. 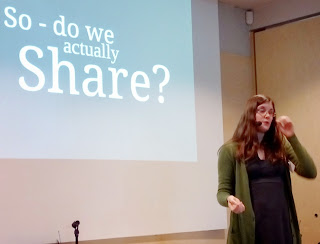 After a restoring lunch break Jenny Molloy (University of Oxford/University of Cambridge, UK) taught us how to open up our research data. Following an introduction to Open Research Data the participants were asked to list three reasons why they would share and might not share their data. The listed reasons for not sharing data were explained while playing the Open Data Bullsh** Bingo - this was fun ;)

The final seminar led by Peter Kraker (KNOW Center AT) and Joe McArthur (Right to Research Coalition) gave an insight on how to get recognition for Open Science activities. It was very important for the early-career researchers to see how not only the community, but also themselves and their research career can benefit from openness. The trainers introduced some useful tools and strategies to power up one's research work by making it open.

The final session of the day was an open fishbowl conversation on how to avoid pitfalls when practising Open Science. The participants had the chance to ask the trainers burning questions that came up during the day.

All sessions from the first conference day have been recorded and are available on the YEAR website.

On the second day the workshop on open project ideas took place. 15 young researchers submitted their innovative research project ideas prior to the conference to get a chance to win one of the two YEAR Awards consisting of a European Project Management training course and 5000 Euro each to further develop the project ideas.

The workshop followed the scheme from the last two years as well. As a first step all participants who submitted a project idea presented it and tried to convince the other attendees to give it their vote. The first selection was done by adding the points the workshop participants gave to the ideas. The five ideas with the highest number of points went into the second round and were elaborated further in groups. 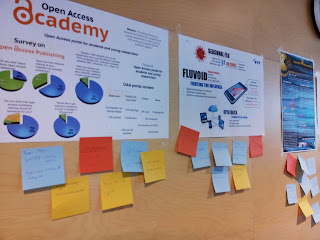 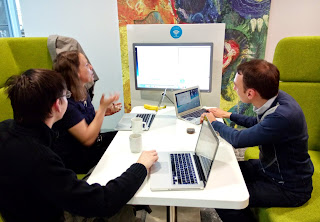 The achieved team work was presented in a final presentation, in which the project idea owners tried to convince the jury - consisting of the trainers from the first conference day - of their idea. It was amazing to see the progress the five teams achieved in terms of refining and focussing the original project ideas.

Finally, the jury selected the two most outstanding ideas. Before announcing the winners, the jury members emphasized the originality and quality of all submitted project ideas. This year's YEAR Awards go to Oliver Zendel (AIT, Austrian Institute of Technology) and his idea Towards an Open Peer-Review Process, and to Helena Henno (VTT) and her idea Fluvoid - a Smartphone-based Diagnostic System for Preventing Epidemics. Congratulations to both winning teams!

This post is just a very quick overview of two very intense and rich conference days and does not account the great social activities that took part next to the conference itself. Before the conference a considerable number of the conference participants attended a social weekend organised by Young VTT, and at the end of the first conference day we had an amazing dinner on a small island (Sirpalesaari). It was a great time with exciting people - I am already looking forward to the next Annual Conference by YEAR!