My own expedition into the world of open science took me to the Faculty of Behavioural Science’s Minerva Plaza on 20 October 2015 during the international Open Access week. Helsinki University Library organised its fourth introductory seminar on new kinds of open access to science in this modern learning environment of the University of Helsinki in the district of Kruununhaka. This time the seminar took the form of an all-day workshop conducted in English.

The heading “Get your feet wet in Open Science!”encouraged the novice to test the shallow waters of the sandy beach, while Ivo Grigorov, the speaker from Denmark, was in his element swimming the deep water out at sea.

Before introducing Ivo and the discussion I had with him, a few words about the Open Science Workshop and the reasons why the Library would advocate open science.

The Open Access Workshop was part of a training programme under the two-year (2014–2016) FOSTER project of the EU targeted at researchers, postgraduate students, librarians and others involved with open science. The EU is a strong advocate of open access policies. The FOSTER project aims to promote the openness of European research by means of training.

A library is a suitable organiser for a training event on open access to science. After all, libraries have throughout their history provided access to printed academic publications for anyone who is interested. With digitisation and technological advances, this objective has extended to include making the entire life-cycle of a research project available online.

The University of Helsinki supports the openness of the research conducted under its auspices through what is known as an open access mandate that was included in a 2008 rector’s decision on open access to research publications (Rector’s Decision No 126/2008). The decision states: “Open access to the results of publicly-funded research enhances the visibility and impact of the research of both the University at large as well as individual researchers.” 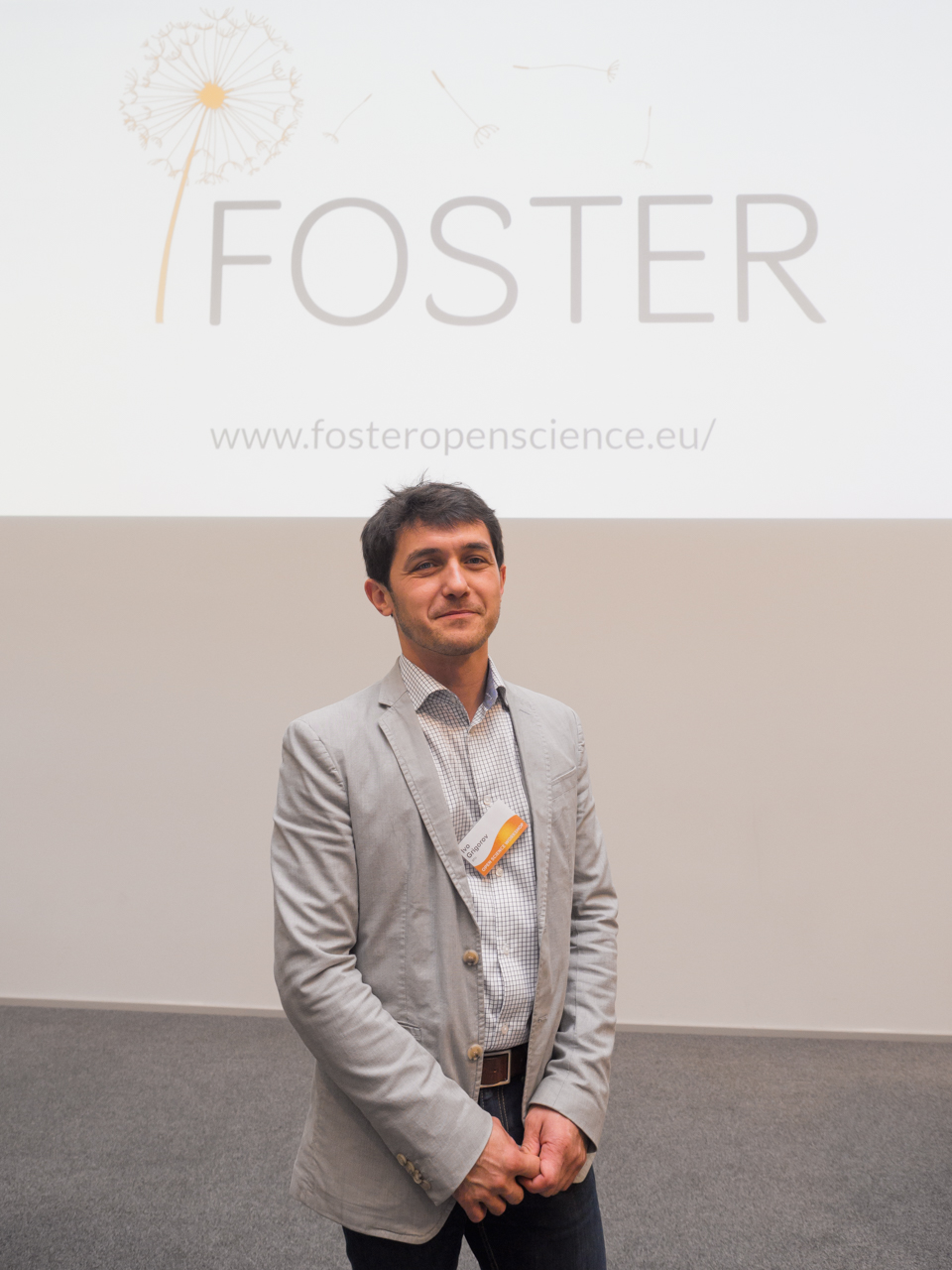 Ivo and promising prospects on the horizon

Ivo can barely be seen against the horizon now! But not to worry, he brings encouraging news for beginners. Ivo Grigorov was a speaker also last year at the Meilahti Campus Library’s seminar during the 2014 Open Access Week. His presentation then and now focused primarily on the obligation for open access included in the Horizon 2020 research and innovation programme of the EU. Horizon 2020 spans seven years (2014–2020) with a budget of nearly 80 billion euros. For example, Tekes – the Finnish Funding Agency for Innovation – describes the objectives of Horizon 2020 on its webpage as follows: “The Commission has the objective to drive economic growth and create jobs in Europe as well as secure Europe’s global competitiveness through the Horizon programme.”

However, my interview with Ivo was not inspired by the EU funding programme, but rather by my own preconception that open science – what is meant by it and what its objectives are – is not an issue familiar to the greater public. In fact, are all researchers even familiar with the concept?

The text below includes some clarifications that I have added in square brackets to my questions or the interviewee’s responses.

Presentation of the interviewee

Ivo Grigorov, Research Projects Manager at DTU-Aqua, advocate for Open Science as part of FP7 Foster project (www.fosteropenscience.eu); I have a keen interest in the greater impact of Open Science for individual careers and institutions, which would be better equipped to deal with Societal Impact, and Open Innovation supplied with accessible new research.

[DTU: Technical University of Denmark; FP7 is the name of the previous European Framework Programme for Research and Technology (2007-2013) under which FOSTER is funded]

How would you define open science?

Open Science is a way of performing research that removes all possible barriers for known and unpredictable actors, so that all can access, read, use, and if they choose to, participate in the process of discovery, or translation of new results in societal context. It is a little dreamy, but dreams get us out of bed in the morning, and drive us to do things better.

Your subject is oceanography. What kind of science is it? How did you become interested in oceans?

(NB: no longer a researcher, just a PhD in Oceanography) - Oceanography is a blanket term, and covers biology, chemistry, physics, geography and geology of the watery (and salty) part of the planet. I would love to tell you that it was a conscious and clear decision to pursue studies in Oceanography, but it wasn’t. It was just curiosity and thirst to know more about something so far away, yet so fascinating.

Spark of interest for open science

At which point did you become convinced of the importance and benefits of open science?

I am a late comer compared to some of my FOSTER collaborators. My first exposure to the concept was in 2005, and totally by accident! As part of my then job, I had to observe and help colleagues (senior scientists) having to digitize datasets from figures in pdf peer-reviewed publications (frequently of poor image quality) that were actually published well after the internet invaded academia; and this was done, just so they could compile databases of valuable results and analyze them in computer models! In the digital age, this seemed like sending a friend a text message by chiseling the letters on a stone plate, and then delivering it on foot, just because (at some point in the past) that was the way things were done!

In your opinion, should researchers have basic information of the procedures of ‘e-science’ in order to understand the relevance and importance of open science?

[By e-science I here refer to the research process, the different stages of which take place online and which is characterised by cooperation, sharing and openness; also: digital science.
See for example: https://ec.europa.eu/digital-agenda/en/open-science]

I strongly suspect that most researchers already have an appreciation of the importance of Open Science and its relevance for their career and society. But peer-pressure and lack of career evaluation incentives keeps them moored to habits that may be imperfect, but ones that they know best.

Should we train the future generation of researchers in e-science by default, and as part of their research excellence training? I don't see how else they can be prepared for a future that will be based on: e-science; digital scholarship; dissemination and translation of results in societal context; and research evaluation criteria that are much more diverse and expansive than the current system.

Can they make informed career choices in future without such standard training provided by graduate schools now?

A new kind of openness

What would you say to those researchers who claim that, of course, the results of scientific work are open to all. They might wonder what these campaigns for ‘open science’ stand for. For example many researches in the field of humanities and social science are still not familiar with the process of digitalization. Should they care about ‘open science’ and does it concern them?

Are scientific results already open to all? Well, we all need to ask our own families how many of them can freely read the latest research on their mobile devices, without going into a university library? For most disciplines, the answer will be only one in two scientific publications are freely accessible to non-academics in the EU.

Most researchers may say that this is not necessary, but funders, and practice, says otherwise. Not only does the non-academic public have the capacity to understand research results, but citizen scientists, garage innovators and teenagers with keen Google Scholar appetites fuel a whole Open Innovation industry that funders want to capitalize on. Open Science is the lifeblood for Open Innovation, and the simple flow of new ideas. 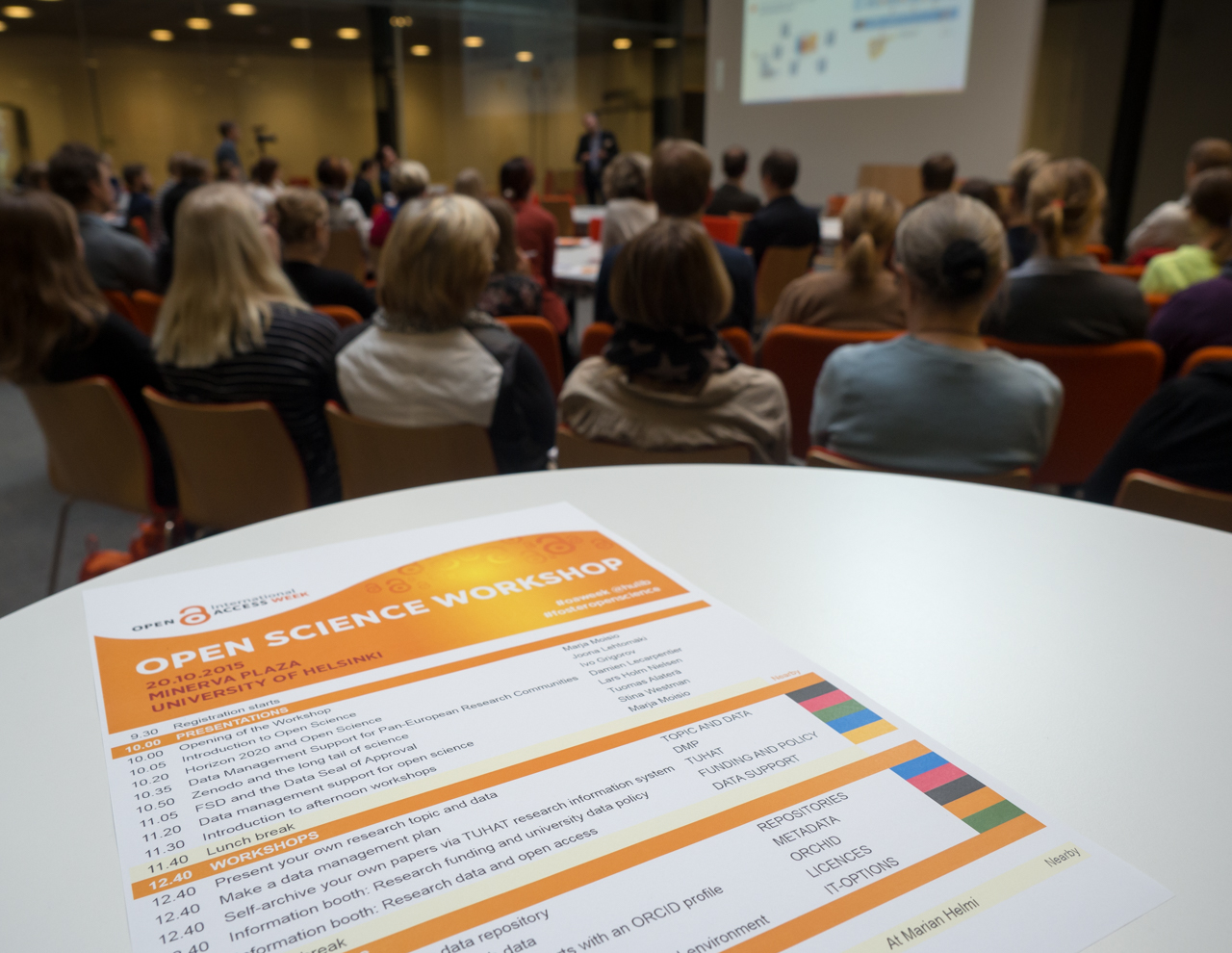 The power of the crowd

The justifications for open science are convincing. Are there any other ways for researchers to promote collaboration with society?

“Science Literacy” initiatives (cf. Climate Literacy, Digital Literacy, Coding Literacy, Ocean Literacy initiatives) can, and do, melt barriers and divides between academia and society. “Citizen Science” takes it a step further and engages citizens in the discovery process from astronomy to malaria and fisheries research. Such examples are significantly magnified if the basic research results are openly available to all to recombine as they see fit, and use and re-use in foreseeable and totally surprising directions.

Could you tell us an example of how open science has made possible a significant development, maybe a breakthrough in science or had an impact on political decision-making, thereby benefiting our globe?

Just some examples I could quickly dig out:

What is your next destination after Helsinki?

I wish you the best of luck with your open science projects! Thank you!

See the benefits and manage the tools of open science

Open science – two words that are easy to dismiss, for one reason or another.When you stop taking the words for granted, you realise that behind them lies an extensive, hopeful vision of the future, even at the national level.

The aim of the Open Science and Research initiative (2014–2017) of the Ministry of Education and Culture is for Finland to become one of the leading countries in openness of science and research by the year 2017 and that the opportunities offered by open science will be widely exploited in our society. Bold, encouraging visions of the future and their promotion are of the utmost importance in present-day Finland.

The Open Access team of Helsinki University Library’s Research Services – a group of experts with versatile network partners – invested great, determined efforts on organising the international Open Access Week for the eighth time as well as the Open Science Workshop.

Most participants were doctoral students, who, among other things, presented their projects based on open science practices, experimented with storing research data in the data storage services and learned about data description in the afternoon workshops.I believe that the invitation “Get your feet wet in Open Science!” encouraged the participants to at least dip their toes in the water.

The programme designed by the organising team with its engaging workshops and speakers, as well as the relaxed atmosphere of the light-flooded Minerva Plaza, all contributed in their own manner to the idea of open access and its deep meaning in other aspects than just open science.It was a pleasure to be part of this event.

The article was first published in Finnish in the journal of the Helsinki University Library 2nd November 2015.