Open access to the scientific literature is urgently needed worldwide, and it will take the support of scientists at all career levels to make it happen. Early career researchers are in a position to be game changers, ushering in a new era of open science. But many are concerned about the repercussions of publishing in open access journals on the visibility and impact of their work and their prospects for obtaining employment, grants, and tenure. The author, Erin McKiernan (National Institute of Public Health, Mexico), tackles these concerns with a discussion of publishing options, changes to licensing agreements, self-archiving, and other ways in which early career researchers can be open and successful. He also discusses how those at more advanced career levels can support early career researchers in being open. 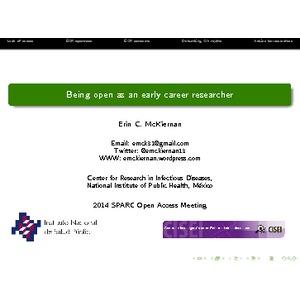